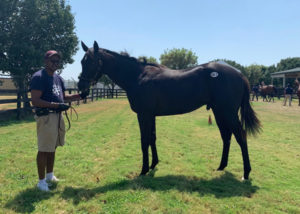 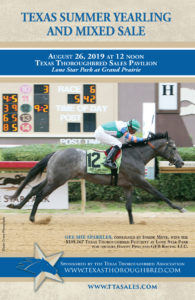 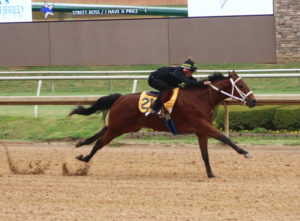 After four fillies tied for the fastest time during Sunday’s under tack show at Lone Star Park, fillies again took center stage in Wednesday’s Texas 2-Year-Olds in Training Sale with the five highest prices. The auction, sponsored by the Texas Thoroughbred Association and Lone Star Park, was held at the Dallas-area track.

“Overall we were pretty pleased with the results,” said Tim Boyce, sales director. “I’m happy to see that the median jumped up. Last year we had four horses break $100,000 compared to two this year, so that affected the average a bit but there was strong demand in the middle of the market as evidenced by the median going up. I heard from several horsemen today who said they were impressed by the quality of horses brought by our consignors.”

Hip 21, a daughter of Street Boss who worked an eighth-mile in :10.3 in Sunday’s under tack show, topped the sale with a $150,000 bid from Maui James. Consigned by Asmussen Horse Center, agent, the unnamed Kentucky-bred is the first foal out of the winning Successful Appeal mare I Have a Price.

Maui James was the leading buyer with two purchases for $203,000 with Danny Keene ranking second with four bought for $171,000.

The second-highest price was for hip 131, All in Harmony. The Kentucky-bred filly by Palace Malice went for $140,000 to Carl R. Moore Management LLC from the consignment of Twin Oaks Training Center LLC, agent. She is out of the Tale of the Cat mare Cativating and worked a furlong in :10.3.

The highest-priced male, and sixth-highest overall, was hip 129. The Oklahoma-bred colt named Duffield and sired by Kennedy sold for $62,000 from Bryan Ford, agent, to John James.

Videos and photos for all the horses in Sunday’s under tack show at Lone Star Park for the Texas 2-Year-Olds in Training Sale are now online. The auction is set for Wednesday, April 10 at 12 noon and will have live video available right here on the TTA Sales website.

You can also view a complete video of the entire under tack show in hip number order by clicking here.

The following horses are out of the Texas 2-Year-Olds in Training Sale (updated as of Wednesday morning, April 10):

Four fillies clocked an eighth-mile in :10 2/5 on Sunday at Lone Star Park during the under tack show for the Texas 2-Year-Olds in Training Sale. The auction, originally scheduled for Tuesday, will be held this Wednesday at noon. The sale is sponsored by the Texas Thoroughbred Association and Lone Star Park.

“We saw some great times considering the track was a bit heavy from some significant rain last night, and early on during the under tack there was a pretty stiff head wind,” said Tim Boyce, sales manager.

The first horse to clock the co-fastest time of the day was hip 35, a Kentucky-bred from the first crop of Florida Derby (G1) and Donn Handicap (G1) winner Constitution. Consigned by Diamond C Racing Stables, she is out of the winning Henny Hughes mare Lil Red Cozette, whose only starter is a stakes winner by Graydar.

Hip 58, a Kentucky-bred daughter of Jockey Club Gold Cup (G1) winner Flat Out from the consignment of Bryan Ford, agent, equaled the fastest clocking. The March 4 foal is the second out of the Dehere mare Preciouspurplerain.

From the consignment of Twin Oaks Training Center, agent, hip 72 also joined the fastest group. The Louisiana-bred is from the second crop of Grade 2 winner Guilt Trip out of the Known Fact mare Seda Fina, whose offspring include multiple stakes winner Su Casa G Casa.

The final horse to work :10 2/5 was hip 133, a Texas-bred daughter of Grade 1 winner Twirling Candy, also consigned by Twin Oaks Training Center, agent. She is the first foal out of the winning War Front mare Clara Kelly.

Prior to Wednesday’s sale, a pre-sale brunch will be held from 9 a.m. to 11 a.m. in the sales pavilion with a complementary bloody marys and mimosas along with a selection of complimentary breakfast items and food for purchase.

Replays of the under tack show will posted later tonight. Click here to view the complete list of times.

TTA Sales and Lone Star Park are pleased to announce a pre-sale brunch prior to the Texas 2-Year-Olds in Training Sale at Lone Star Park.

The sale is set for Wednesday, April 10 at 12 noon, and the pre-sale brunch will be held in the sales pavilion that morning from 9 a.m. to 11 a.m. Complimentary Bloody Marys and mimosas will be available along with water, coffee and tea. Also complimentary food including breakfast burritos, fresh fruit with honey yogurt dip, yogurt cups, danishes and pastries will be available along with other food for purchase.

The pre-sale brunch is open to all horsemen, consignors and buyers. 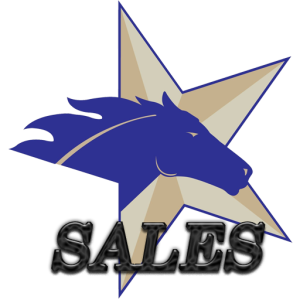 The Texas 2-Year-Olds in Training Sale, originally scheduled for April 9, has been moved to Wednesday, April 10, at 12 noon. The undertack show will be held on the originally scheduled date of Sunday, April 7, at 10 a.m. Both the auction and undertack show will be held at Lone Star Park, which co-sponsors the sale with the Texas Thoroughbred Association.

“After talking with some of our major buyers, and confirming that our consignors were in support of the change, we decided to move the date back a day,” said Tim Boyce, sales director. “We think this new date on April 10 will allow as many buyers as possible to attend in person, and as always we will accept phone bids from those who cannot.” 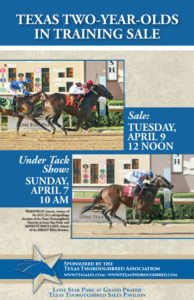 The Texas Thoroughbred Association, in partnership with Lone Star Park, has announced a catalog of more than 135 hips for the Texas 2-Year-Olds in Training Sale to be held Wednesday, April 10, at the Dallas-area track. The sale will start at 12 noon, with the undertack show set for 10 a.m. on Sunday, April 7, at Lone Star.

This year’s catalog is larger than last year, when a total of 106 horses went through the ring. The offering this year also features a stronger group of sires, with national stallions including Kitten’s Joy, Malibu Moon, Uncle Mo and Union Rags all included. As always, the majority of leading stallions in the Southwest region are also represented, including Astrology, Custom for Carlos, Half Ours, My Golden Song and Too Much Bling.

“Our consignors have really stepped up again this year and continue to bring better quality 2-year-olds, and I think the list of stallions in this catalog really proves that,” said Sales Director Tim Boyce. “I’m looking forward to seeing what these horses do in the undertack show.”

All sale graduates will be eligible for the Texas Thoroughbred Futurity, run in divisions for fillies and colts/geldings at $100,000-estimated apiece this summer at Lone Star.

“We’ve had horses from this sale win all around North America, but it’s a nice bonus for buyers to know that they can shoot for a big purse at Lone Star just a few months after the sale,” added Boyce.

The interactive catalog, which will include photos and videos after the undertack show, is now online by clicking here. The auction will also be broadcast live on the website. 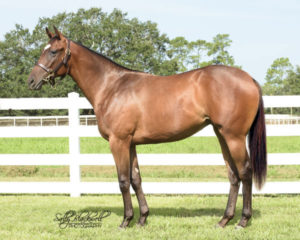